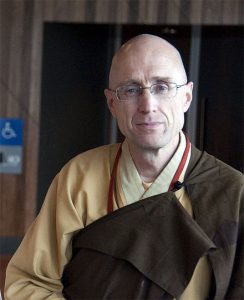 Heng Sure is a senior disciple of Venerable Master Hsuan Hua. When he’s not travelling to deliver talks and lead discussions on topics such Buddhism and Veganism, you’ll find him at home part of the year at Berkeley Buddhist Monastery in California, and the other part at Gold Coast Dharma Realm in Queensland Australia.

Born in Toledo, Ohio, he attended the University of California at Berkeley from 1971-1976, where he was active in theatre and music. After receiving his M.A. in Oriental Languages, he met his teacher, Hsuan Hua, who would later ordain him in 1976 at the City of Ten Thousand Buddhas (CTTB), as “Heng Sure” – a Dharma name which means “Constantly Real.” In 2003, he earned a PhD in Religion from the Graduate Theological Union, Berkeley.

He is perhaps best known for a Three Steps One Bow Pilgrimage he made from 1976 to 1979, along 800 miles of the California Coast from Pasadena to CTTB in Ukiah. During his pilgrimage, and for three more years after he arrived at CTTB, he maintained a vow of silence.

Heng Sure began playing guitar at the age of 16, and although he took a break from music while turning his focus towards a monastic life, he returned to the instrument in 2000. Master Hua felt it would be a great way to make the teachings accessible to Western ears, and encouraged Heng Sure to use his musical talents to turn the Dharma Wheel. And so for close to 20 years now, music has played an integral role in his life and teachings. In addition to three CD’s of Buddhist Songs and Stories, he co-produced an instructional banjo DVD, Zen Banjo, drawing on the connections he has found between meditation and music.

As a leading expert on Buddhist Sutras, he works on translating many Mahayana texts from their original Chinese into English. When he’s in Berkeley, he gives weekly Dharma Talks on Saturday evenings at the Berkeley Buddhist Monastery, which are also broadcast online.