After over three years in the making, the Dharma Radio music album of thirteen songs by Reverend Heng Sure and Friends will be released on November 19, 2020. 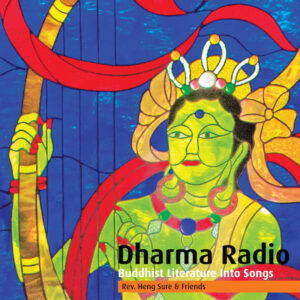 What did enlightened people in China and India write about? When they sang, what stories did their songs tell? How would their songs and stories sound in English, played on a banjo or a guitar? The 13 songs on this album called “Dharma Radio” lets us hear the enlightened mind, to the music of an old-time string band. These are translations into contemporary English from Chinese, Sanskrit, and Pali, including the story of a Tang Dynasty poetry slam, a Guan Yin chant from the Lotus Sutra, the enlightenment poetry of a twentieth century Chan master, and four original songs that carry the Buddha’s teachings into our hearts.

The Dharma Radio album features an all-star band with the talents of Jody Stecher, the late Paul Hostetter, Robin Petrie, Suzy and Eric and Allegra Thompson, Liam Cochran, Fabrizio Alberico, and Bhikshu Jin Wei Shi. Honored to have Henry Kaiser and Jeremy Goody of Megasonic Sound on the controls.

And to top it all off, we have a new idea on how to get these stories into your hands and ears and at the same time leave the world a better place for others. You can buy this album from the usual online venues and the proceeds will be donated to a good cause. Or you can do a good deed, however you envision it, then tell us the story of your act of kindness and we will send you an electronic download of all the songs on Dharma Radio, along with a booklet of lyrics and information. We call this project “Good Karma Music,” and we hope you will agree that good deeds done in exchange for music shows kindness in action.

The album will be released on November 19, 2020 worldwide through Apple iTunes, Apple Music, Spotify, Amazon Music, Good Karma Music, and more. For now, we invite you to visit the album web page  to listen to the demo clips of the songs and read the stories behind the music.

Share this ArticleLike this article? Email it to a friend!
Email sent!